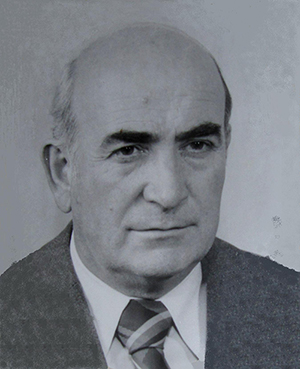 Prof. Nacho Aleksiev Nachev was born on 10.02.1925 in Preslav. He studied and graduated "Industrial Electronics" the Electrotechnical institute in Leningrad (Saint Petersburg) in 1952. In 1961 he attained his PhD in the Electrotechnical institute in Leningrad with his thesis "Research and Analysis of the lamp generator as an electronic invertor for induction heating".

Professor Nachev was an initiator and subsequently department chair of the "Research and Development Laboratory for Industrial Electronics" (1965). As a researcher he established the research field "Electronic converters of electrical energy" in Bulgaria. In this laboratory, a series of autonomous thyristor transformers of electric energy for induction heating were created and introduced in the factory "Industrial electronics" - Gabrovo. Naho Nachev established and became the first department chair of the Department of Power Electronics in 1976. He became the rector of the Higher Institute of Mechanical and Electrical Engineering (Technical University - Sofia) and served two terms from 1976 to 1983. He layed down the foundations and organized the administrative management of the university and the Academic and Rector's Council. As a rector, his main focus was expanding the properties and material base of the university, managing the universities bases in Semkovo, Ravadinovo, Sozopol and Pchelina. He suggested establishing new faculties, helping to develop the university as a main research, developement and technical center in the country.

His main reasearch and teaching areas were in industrial (power) electronics, high frequency heating, power supplies and static power converters. Nacho Nachev was the author of over 50 publications and 5 inventions and also several books in the his research field - "Industrial Electronics", "Power Supplies" and "Static Power Converters". He was an academic advisor to 5 PhD students. As a department chair, he was an active participant in the research and development of the department. Under his leadership, the first thyristor converters in Bulgaria were developed and introduced in industrial production.

Nacho Nachev was a deputy minister for the Ministry of Education. He was awarded the "St. Cyril and St. Methodius" Order, Gold Medal at the Plovdiv fair and was an honored scientist.

Key moments in the department's development

The Department of Power Electronics was officially established on 1 July 1976.